Technology Vs. Human - Who Is Going To Win? An Interview With Gerd Leonhard
Share This

I remember meeting Gerd Leonhard [Futurist, Author and a raft of other titles] for the first time in a particularly crowded Benugo in Covent Garden.

The meeting came after several near misses and during one of his gigs in London and we decided just to wing it.  The fries were unmemorable but the conversation probably set me on the path I find myself travelling today.  Several years (and books) on and his outlook and work still fascinates me.   I have quizzed him on his latest book "Technology Vs. Humanity" [https://www.amazon.com/Technology-vs-Humanity-between-FutureScapes-ebook/dp/B01IUIZBHA/ref=asap_bc?ie=UTF8" style="box-sizing: border-box; background-color: transparent; cursor: pointer; color: rgb(0, 56, 145); text-decoration: none; -webkit-tap-highlight-color: transparent;">Amazon] in which he poses some interesting questions about the future of the human race and technology but essentially asks; "Are you on team human, or not...?  We are at a pivot point in human history [and you need to choose]", reports forbes.com

Paul: You say humanity will change more in the next 20 years than it has in the last 300. Why do you think this is true when most technological advances seem to have had little to do with humans themselves and rather the effect they have or problems they have created for themselves?

Gerd: Technology is always created by humans and in turn re-defining what we can and will do. Every single technological change is now impacting humanity in a much deeper way than ever before because technology will soon impact our own biology, primarily via the rise of genome editing and artificial intelligence. Technology is no longer just a tool we use to achieve something - we are actually (as McLuhan predicted) becoming tools (ie. technology) ourselves. Some of my futurist colleagues call this transhumanism - something I personally think we should examine with great caution. Yet, exponential technological development in sectors such as computing and deep learning, nano-science, material sciences, energy (batteries!) etc means that beyond a doubt we are quickly heading towards that point where computers / robots / AI will have the same processing power as the human brain (10 quadrillion CPS - connections per second), the so-called singularity, in probably less than 10 years. When this happens we will need to decide of we want to 'merge' with the machines or not, and the stance I am taking in this book is clear on that discussion: we should embrace technology but not become it, because technology is not what we seek, it's how we seek!

Paul: What is "future shock" and why do you think man and machine will clash? Can't we all just get along?

Gerd: I am very much hoping that humanity can indeed be steered to just sit 'on top' of machines (even if we won't understand them anymore), and right now we still have pretty good cards for that. What we need is human stewardship that masters the transition into this new machine age. However, it is already pretty obvious that trillions of dollars are spent on making the world technologically 'smarter' (smart cities, smart farming, smart energy...) but very little is spent on getting humans ready for that future - in fact, while machines get smarter we may actually become dumber (see the glass cockpit problem where pilots literally forget how to fly because of the exceeding instances of automation ). And yes, it will be shocking to many of us to be confronted with a reality where machines have taking over many if not most tasks that used to be human such as getting directions, making appointments, finding mates and soon even medical diagnosis (Future Shock, of course, refers to Alvin Toffler's book, though). A clash may well result NOT because machines make 'go rogue' or will take over and eradicate us but because some of us humans may increasingly become like machines (i.e. augment themselves) in order to compete with them - this will obviously cause major unrest in society, and opens up huge ethical conundrums. technology is morally neutral until we apply it (William Gibson) -- think of this challenge x1000 and you have the next 20 years.

Paul: "Man and machine will converge" - how far are we from really wet-wiring ourselves together or will this never really happen?

Gerd: Today we are using smartphones to connect to the cloud aka 'the global brain'. They are brain extenders, basically. Wearables are next, plus augmented and virtual reality which will become so powerful that many people will never want to be without it - seeing the world differently is a very powerful thing! Voice control will quickly become the new normal; in less than 5 years typing will be replaced by just speaking to whatever device we are using. Brain-Computer Interfaces are already here but again... once we have computers that match our own brain capacity (and then... with an IQ of say 50.000?), and better connectivity and better batteries... it could also become the 'new normal'. Implants would follow (and already are being investigated) to make that interface even more seamless. The final step - the 2nd neocortex (Kurzweil) - is still pretty far away, though - in overall terms maybe less than 50 years, though. We will need to decide, very soon, where humans end and machines start, and vice-versa- and this is an ethical question NOT a technological challenge. In my view, significant technological upgrades to humans are really more like downgrades because we would lose so many human-specific abilities and idiosyncrasies in return.

Paul: "Exponentiality" is a much-debated subject right now - some believe limits of computing are about to be ended

Gerd: I tend to agree as many exponential technologies are also combinatorial i.e. one amplifies the other [see image below]. The reality is that if you ask the question IF technology can do something or not, the answer will almost always be 'yes', already - there is pretty much no limit to what technology can do in the very near future. The WHY question will replace the HOW question. 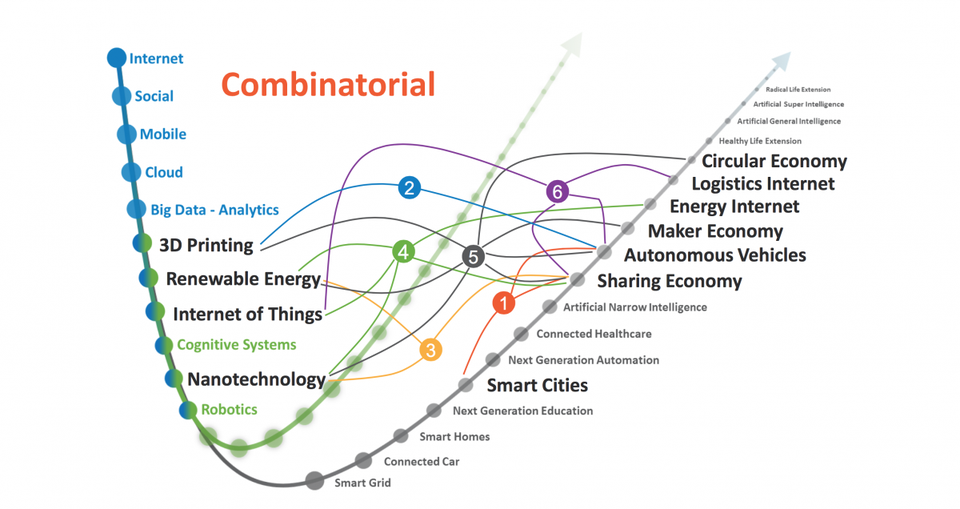 Paul: How do we get to digital or physical Utopia in a world controlled and manipulated by Capitalist systems?

Gerd: technology makes things abundant because with good tech the price drops dramatically (see digital music or Netflix NFLX +5.5% etc) - and exponential tech will make things exponential abundant. Media, information, travel, financial services, medical services, food, water, energy... in that order (see image below). In less than 20 years we may get to the point where we have abundant energy, water and food, while most of the work is being done by machines or software which means we only 'work' for a few hours every day while enjoying the same standard of living, and income. This will mean that consumption and growth can no longer be the defining principles of economics - a kind of post-capitalism will develop. GDP as a metric will be completely gone by then - and maybe we will find a way to pursue more GNH (gross national happiness):) 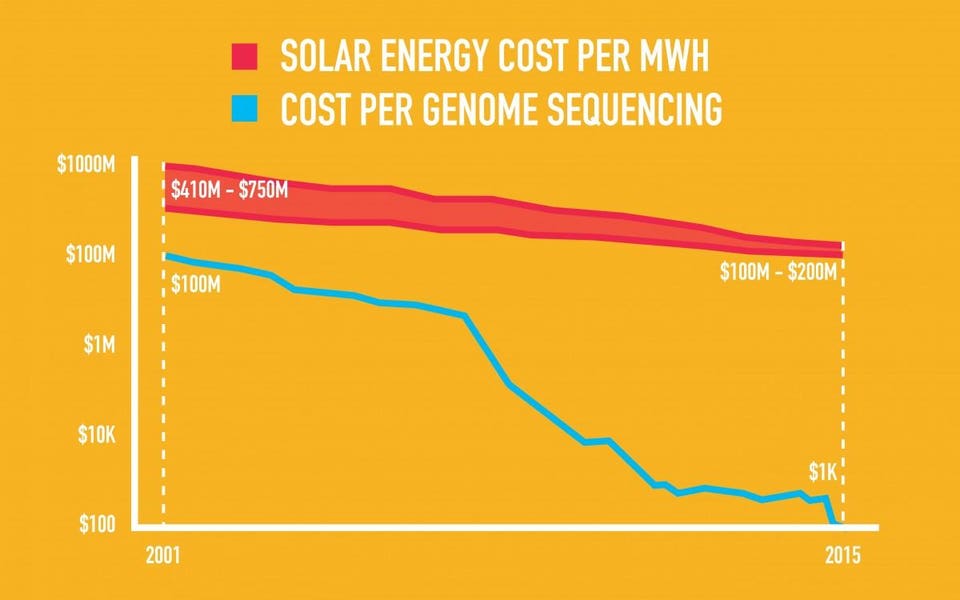 Paul: You've said; "Technology doesn't have ethics, we need to spend just as much time on the norms, the values and the context than we spent on the technology itself". Why aren't people thinking ethics first? Asimov's rules aside, what else should we be doing?

Gerd: Like sustainability, ethics is often thought of as a nice to have, a thing to consider when you have time, a luxury, non-monetizable. But now it is becoming clear that those distinctly human things that are not measurable (I call them the "androrithms" - as opposed to algorithms) such as emotions, intuition, beliefs and ethics are what sets us apart from machines. The challenge is, of course, that turning the world into a giant machine (i.e. disembodied, automated, de-souled) will make oodles of money, while ensuring humanness is much less of a business opportunity. Right now, it would certainly be a unique moment when a technology company would choose not to proceed because of ethical concerns. What we need to be doing is a) to hold those providing the tools and platforms responsible for consequences, unintended or not, and to have them include these 'externalities' in their business planning, and b) to construct a binding global framework of digital ethics (similar to the current NPTs), and invest heavily into what I call 'exponential humanism' i.e. to put real money behind human flourishing (and yes, on top of technology), safeguarding our humanness much like we safeguard nature already. There are things we probably should not do, even if we can.