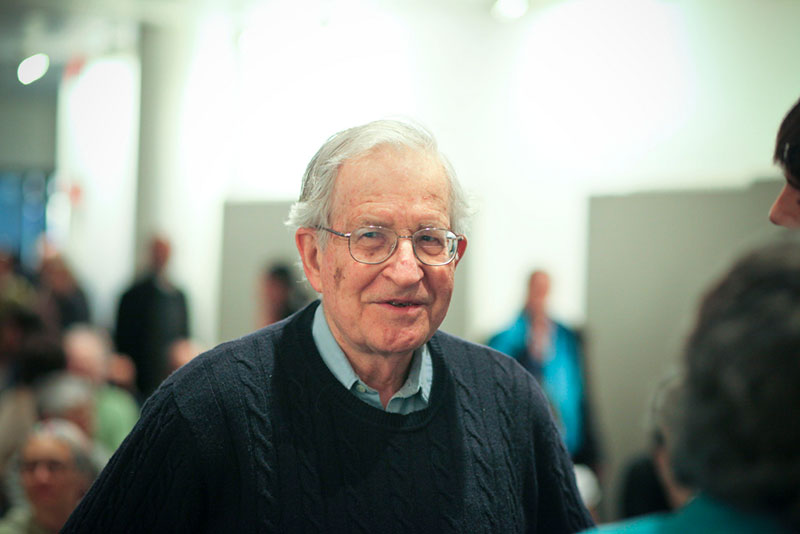 Noam Chomsky: 10 ways to manage the masses
Share This

Managing human behaviour is one of the top priorities of the state. True, one must understand that the state is created by its citizens in order to harmonize their own interests, but the state or political power acquires its own interests and its top priority is to manage those who elected it and maintain it for the purpose of preserving its self-preservation.

If people begin to show discontent with the current policy, which results from the narrow corporate interests of the ruling elite and their agents, then in order to avoid violence against the people, it can only be countered by propaganda, the instrument of which is the media, reports lifeinfo.me.

Noam Chomsky, professor of linguistics at the Massachusetts Institute of Technology, a linguist, philosopher, public figure, author of books and political analyst, compiled a list of “10 ways of manipulating” through the media.

The main element of society management is the diversion of people’s attention from important problems and decisions made by political and economic ruling circles, through the constant saturation of the information space with insignificant messages. The diversion of attention is very important in order to prevent citizens from gaining important knowledge in the field of modern philosophical currents, advanced science, economics, psychology, neurobiology and cybernetics. In exchange, the information space is filled with news of sport, show business, mysticism and other information components, based on relic human instincts from eroticism to hard pornography and from everyday soapy subjects to questionable ways of easy and quick profit.

“… constantly divert the attention of citizens from real social problems, switching it to topics that have no real meaning. To ensure that citizens are constantly engaged in something and they do not have time to think; from the field – into the corral, like all other animals. “(N. Chomsky quotation from the book” Quiet weapons for calm wars “).

CREATE PROBLEMS, AND THEN OFFER THE WAYS OF THEIR SOLUTIONS

This method is also called the “problem-response-solution”. A problem is created, a kind of “situation” designed to cause a certain reaction among the population so that it itself requires taking measures that are necessary for the ruling circles. For example, to allow the spiral of violence in the cities to be untwisted or to organize bloody terrorist attacks so that citizens demand the adoption of laws to strengthen security measures and pursue policies that infringe on civil liberties.
Or to cause some economic, terrorist or technogenic crisis to force people in their minds to take measures to eliminate its consequences, even if in violation of their social rights, as “a necessary evil.” But we need to understand that crises themselves are not born.

To achieve adoption of any unpopular measure, it is enough to introduce it gradually, day after day, year after year. In this way, fundamentally new socio-economic conditions (neoliberalism) were globally imposed in the 80s and 90s of the last century.
Minimizing the functions of the state, privatization, uncertainty, instability, mass unemployment, wages, which no longer provides a decent life. If all this happened simultaneously, then surely would lead to a revolution.

Another way to squeeze an unpopular decision is to present it as “painful and necessary” and to achieve at the moment the citizens’ consent to its implementation in the future. It is much easier to accept any sacrifices in the future than in the present.

First, because it will not happen immediately. Secondly, because the majority of the people are always inclined to cherish naive hopes that “tomorrow everything will change for the better” and that those victims who are demanded of it will be avoided. This gives citizens more time to get used to the idea of ​​change and to accept them humbly when the time comes.

TO APPEAL TO PEOPLE AS TO SMALL CHILDREN

Most propaganda speeches designed for the general public use such arguments, characters, words and intonation, as if they are children of school age with a delay in development or mentally deficient individuals.
The harder someone tries to deceive the listener, the more he tries to use infantile speech. Why?

If someone refers to a person as if he is 12 or less years old, due to suggestibility, response or reaction of this person, with a certain degree of probability, there will also be no critical evaluation, which is typical for children aged 12 or less years .
In advance, naive reasoning and capital truths laid down in political speeches are calculated on the perception of a wide audience, to which the above and below described methods of manipulating its consciousness are already applied.

DOING THE EDUCATION FOR THE EMOTION IN A MUCH MORE DEGREE, THAN ON REVIEWS

The impact on emotions is a classic technique of neurolinguistic programming, aimed at blocking people’s ability to rational analysis, and in the end, and in general, the ability to critically comprehend what is happening. On the other hand, the use of the emotional factor allows you to open the door to the subconscious in order to instill thoughts, desires, fears, fears, compulsions or persistent patterns of behaviour. Spells about how cruel terrorism is, how unjust power, how hungry and humiliated people leave behind the scenes the true reasons for what is happening. Emotions are the enemy of logic.

This includes the propaganda of the so-called “modern art”, which is the arrogance of mediocrities pretending to be famous, but unable to reflect reality through those works of art that do not require detailed explanation and agitation for their “genius”. Those who do not recognize the replica are declared backward and stupid and their opinion is not subject to wide publicity.

CREATE CITIZENS TO BE BROUGHT BY MEDITATION

Introduce in the population the idea that it is fashionable to be stupid, vulgar and ill-bred. This method is inseparable from the previous one, as everything mediocre in the modern world appears in huge quantities in any social spheres – from religion and science to art and politics. Scandals, yellow pages, witchcraft and magic, dubious humor and populist actions – everything is good for one purpose – not to let people have the opportunity to expand their consciousness to the vast expanses of the real world.

ENHANCING THE FEELING OF OWN WINE

Make a person believe that only he is guilty of his own misfortunes, which are due to a lack of his mental abilities, abilities or efforts. As a result, instead of rebelling against the economic system, a person begins to engage in self-deprecation, blaming himself for everything, which causes a depressed state, leading, inter alia, to inaction. And without action about any revolution, there can be no question! And politicians, scientists (especially psychotherapists) and religious figures use effective enough doctrines to achieve the effect of self-flagellation of patients and flock to manage their life-affirming interests, directing the actions in the right direction.

Over the past 50 years, advances in the development of science have led to the formation of an ever-widening gap between the knowledge of ordinary people and the information that the ruling classes possess and use.
Thanks to biology, neurobiology and applied psychology, the “system” has at its disposal advanced knowledge of man, both in the field of physiology and the psyche. The system managed to learn about the ordinary person more than he knows about himself. This means that in most cases the system has more power and more control over people than they do.