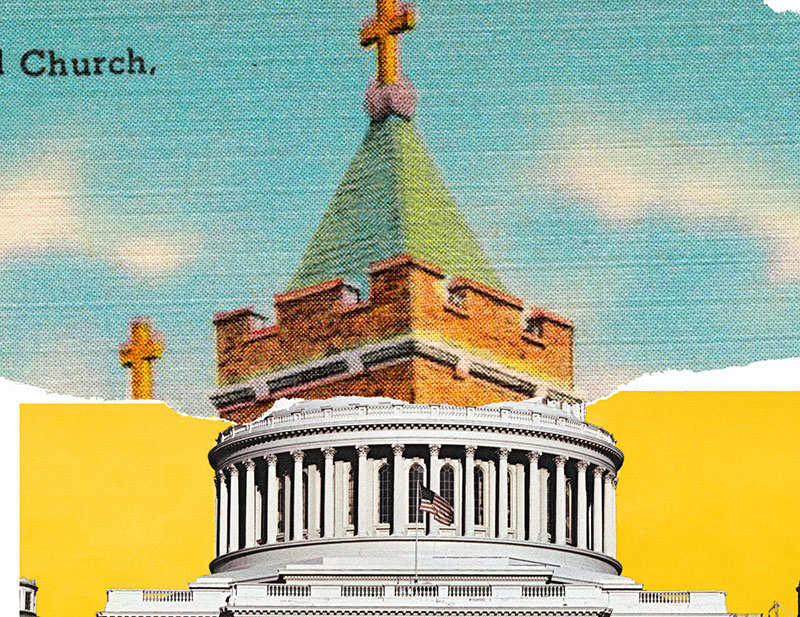 07.07.2018. APCNEWS.RU.   Many Americans were shocked last week when Attorney General Jeff Sessions turned to the Bible — specifically, Paul’s epistle to the Romans — to justify President Trump’s policy of separating migrant children from their parents.

This scriptural justification for a political decision should not have surprised anyone, because Mr. Trump’s administration has consistently treated the separation of church and state as a form of heresy rather than a cherished American value, reports Nytimes.com.

Attacks on the wall of separation established by the founders — which the religious right likes to call “a lie of the left” — are nothing new. What has changed under Mr. Trump is the disproportionate political debt he owes to extreme religious conservatives, whose views on church-state issues — ranging from the importance of secular public education to women’s and gay rights — are far removed from the American mainstream.

The very meaning of the phrases “religious liberty” and “religious freedom”— traditionally understood as referring to the right of Americans to practice whatever faith they wish or no faith at all — is being altered to mean that government should foster a closer relationship with those who want to mix their Christian faith with taxpayer dollars. This usage can be found in numerous executive orders and speeches by Mr. Trump and his cabinet members. Changes in language have consequences, as the religious right’s successful substitution of “pro-life” for “anti-abortion” has long demonstrated.

Religion-related issues, especially if buried in lengthy government documents, can often seem obscure, but they dominated the news at the end of June, when the Supreme Court upheld Mr. Trump’s travel ban targeting majority-Muslim countries and struck down a California requirement that anti-abortion, state-licensed pregnancy clinics provide notice to their clients that abortion is an option. These significant rulings were immediately overshadowed by the retirement from the court of the frequent swing voter Anthony M. Kennedy, which now gives Mr. Trump the opportunity to nominate a predictable religious conservative who would most likely support the overturning of Roe v. Wade.

While it is impossible to overstate the long-term importance of the next court appointment, Mr. Sessions and many of his fellow cabinet members offer textbook examples of the everyday perils of entangling religion with politics. Mr. Sessions’s citation of the opening verse of Romans 13, which declares that every soul must be “subject to the governing authorities” and that there is “no authority except that which God has established,” inflamed an already bitter debate over immigration.

The White House press secretary, Sarah Huckabee Sanders, followed up with a reminder that it was “very biblical” to enforce the law. Neither went on to quote the verse in the epistle that proclaims, “Love does no harm to a neighbor; therefore love is the fulfillment of the law.”

Many pro-immigration religious leaders, including Catholics, Protestants, Jews and Muslims, took umbrage at the biblical justification for a policy that could hardly be described as loving. Their objections, however, were based mainly on the idea that Mr. Sessions had picked the wrong verse.

It was left to secular organizations to identify all religious rationalizations as the fundamental problem. The Center for Inquiry, a secular think tank, and the Freedom From Religion Foundation, on whose honorary boards I serve, issued strong condemnations — as did the Americans United for Separation of Church and State. Rachel Laser, president of Americans United, put it succinctly: “The separation of church and state means that we don’t base public policy on the Bible or any religious book.”

And yet Trump administration officials have used fundamentalist biblical interpretations to support everything from environmental deregulation to tax cuts.

Scott Pruitt, who resigned as head of the Environmental Protection Agency in disgrace Thursday, exited with a letter that repeatedly used the word “blessed” to describe his service. Mr. Pruitt, a former trustee of the Southern Baptist Theological Seminary, had asserted (while he still had a job) in an interview with the Christian Broadcasting Network that Americans who want stricter environmental standards are contradicting the Bible. He said, “The biblical worldview with respect to these issues is that we have a responsibility to manage and cultivate, harvest the natural resources that we’ve been blessed with to truly bless our fellow mankind.” The trenchant headline recounting the interview in Baptist News read: “God Wants Humans to Use Natural Gas and Oil, Not ‘Keep It in the Ground,’ says E.P.A. Chief.”

Many evangelical Christians do not share such theocratic fantasies. These evangelicals, like former President Jimmy Carter, are spiritual descendants of Roger Williams, who was banished from the Puritan theocracy of the Massachusetts Bay Colony and founded the first Baptist congregation in colonial America. Williams is also credited as the first person to use the phrase “wall of separation,” in a 1644 response to the theocratic Puritan clergyman John Cotton. (There should be a “wall of separation between the garden of the church and the wilderness of the world,” he wrote.) Thomas Jefferson used the expression in a famous 1802 letter to a Baptist congregation in Danbury, Conn.

Williams is an inconvenient figure for today’s religious right, which asserts that the only purpose of the “wall of separation” was to protect religion from government — not government from religion. That was true in early colonial America, but the other side of the equation was well understood by the time the Constitution — which never mentions God and explicitly bars all religious tests for public office — was written. Destructive religious wars in 17th-century Europe, among other factors, had led many Americans to the realization that governments could indeed be threatened by a close identification with religion.

President Trump’s appointees seem unconcerned about whether statements praising the godliness of mixing religion and politics will offend secular and many religious Americans.

Ben Carson, the secretary of housing and urban development and a devout Seventh-day Adventist, has described commitment to the separation of church and state as “crap,” prompted by “political correctness.”

At a December cabinet meeting, Mr. Carson was asked by Mr. Trump to say a prayer thanking God for the recently passed tax cut bill. Mr. Trump also took a jab at the press pool and said, “You need the prayer more than I do, I think.” Speaking to Mr. Carson, he added: “Maybe a good prayer and they’ll be honest, Ben.” Mr. Carson responded by thanking the Almighty for a “courageous” president.

Mr. Sessions took on a larger mission last fall when he sent a 25-page memo on “protections for religious liberty” to every federal agency. It warned that government “may not exclude religious organizations as such from secular aid programs, at least when the aid is not being used for explicitly religious activities such as worship or proselytization.”

Andrew Seidel, a lawyer with the Freedom From Religion Foundation, notes that although it’s hard to know what this will mean in practice, “It’s an invitation — but one that carries great authority — to go further and further and further in shrinking the distance between church and state.”

Last but not least is Education Secretary Betsy DeVos. Ms. DeVos, raised as a strict Calvinist, has devoted much of her life to promoting private and religious schools over public education. She is particularly proud that last year’s tax bill expanded the education savings accounts known as 529s so that they can now be used to pay for private schools, starting from kindergarten.

In May, Ms. DeVos visited New York City, which has the largest public school system in the country. She did not inspect a single public school. Instead, she stopped by two Orthodox Jewish schools and spoke at a fund-raiser where she was introduced by Cardinal Timothy Michael Dolan. In her speech, she expressed support for tax credits to help pay tuition for private schools.

While applauding state initiatives to aid these schools, Ms. DeVos opposes any federal program that would create a new bureaucracy. That is not enough for Cardinal Dolan, who wants federal money (presumably because he knows that New York is unlikely to divert more taxpayer dollars to private schools).

“Some states will need more prayers and more action than others to bring about needed changes,” Ms. DeVos acknowledged.

As someone who believes that the separation of church and state provides equally needed protection for government from religion and for religion from government, I am grateful that laws speak louder than prayers — and take longer to craft on this earthly plane.