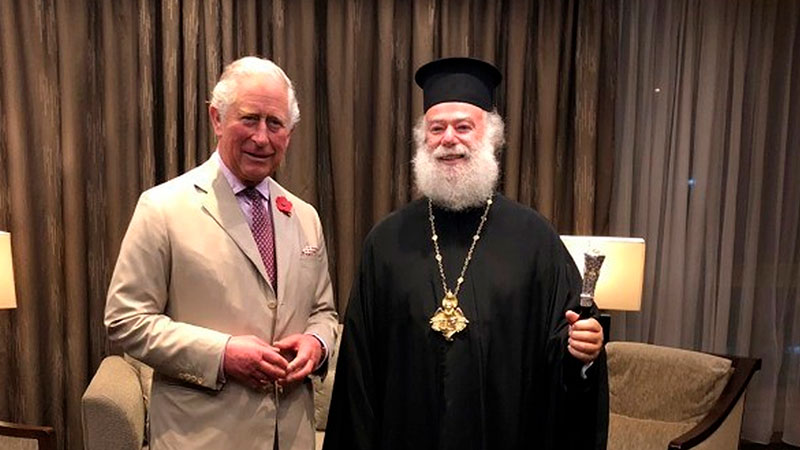 Patriarch of Alexandria meets with Prince Charles in Ghana
Share This

During his visit to Ghana, His Beatitude Patriarch Theodoros of Alexandria and All Africa on Sunday met with His Royal Highness Prince Charles of Wales.

The meeting lasted about 30 minutes and was considered ‘very cordial’.

According to the Patriarchate of Alexandria, the two parts expressed their joy for the occasion to meet in Accra, in the context of the official visits paid by the Patriarch of Alexandria and the Prince of Wales in Ghana.

During the November 4 meeting, His Beatitude Patriarch Theodoros informed the Prince of Wales regarding the activity carried out by the Patriarchate of Alexandria in Africa, stressing the efforts to support youth education.

His Beatitude also referred to the historic ties between the Patriarchate of Alexandria and the United Kingdom in the time of Patriarch Cyril Lucaris and King Charles I of England.

He mentioned the important volumes donated by King Charles I to the library of the Patriarchate of Alexandria.

The heir to the British crown expressed his concern about the difficult situation of Christians in the Middle East, but also his willingness to help solve the problems they are facing.

Finally, Prince Charles accepted Patriarch Theodoros’s invitation to visit Alexandria, expressing his desire to make a pilgrimage to the city of Alexander the Great in the near future.