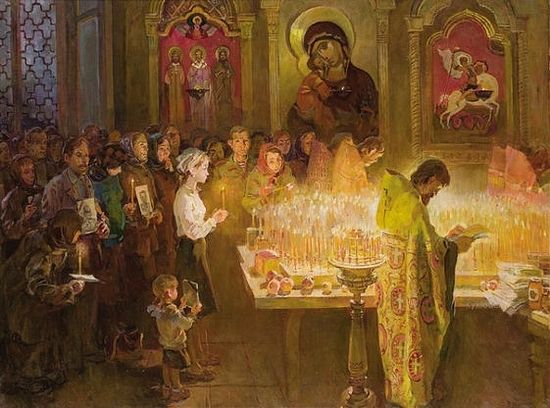 Christ is Risen! Be Bold! Parent’s Remembrance Saturday
Share This

The Universal Parent Remembrance day (Meatfare Saturday) is one of the main days in the Orthodox calendar year for the commemoration of the dead.

In general, every Saturday is a special day for Christians. According to the Bible, on Saturday the creation of the world was completed, and it became the Sabbath, “day of rest”.1 That is why we call it the last day of the week (I emphasize, the last!) somewhat changed from the Hebrew Shabbat. But also on this day, Christ slept in the flesh and completed the creation of this promised—that is, Old Testament—world, and descending into hell, He proclaimed the beginning of a new life. Do you remember the troparion from the Paschal hours? “In the grave bodily, in hell with the soul as god, in Paradise with the thief, and on the throne with the Father and the Spirit was Thou Who fillest all things, O Christ the Infinite.”, reports orthochristian.com

Therefore every Saturday a commemoration of the dead is served—for those who have not left us forever but who patiently wait for the final day of the general Resurrection. Amongst these days are distinguished the yearly “Parent Commemoration day”, so named because every Christian first of all prays for his parents.

Why is this Saturday chosen in particular?

Before the Sunday of the Last Judgment, the Holy Church prays for the dead, so that they along with us would stand at the right hand of the Judge. We especially pray for those who, as the instruction in the Triodion synaxarion says, were carried off by sudden death in foreign lands, in the sea and in impassable mountains, in clefts of rocks and abysses; who died from famine and hunger, at war, in fires, from cold, as well as for the poor and infirm and all those who never received “the appointed psalms and chants for their memory”—that is, who never received a Christian service after their repose. Moreover through today’s prayer services for the dead the Church reminds us of our own inescapable end and the impending severe trial—the Last Judgment.

The divine service texts open to us in detail the “theology of death and resurrection”. “Particularly expressive is the fourth sticheron in Lauds on Meatfare Saturday. It begins with the Paschal exclamation, Christ is Risen! How wonderful it is to hear this joyful exclamation for the first time long before Pascha, right on the day of the commemoration of the dead! This is as the foundation of our very prayer for the reposed. Also, these joyful tidings are a reminder that the Holy Church hastens (such is its love!) to address the dead even earlier than the living, saying, “Christ is Risen... Be bold ye dead. <...> In view of the coming remembrance of the Last Judgment, the Church wants to ease our fear a little of that terrible Day; it wants to encourage the reposed, and along with them the living. Christ is Risen! Be Bold!2

Probably, by far not all have paid attention to this “untimely” Paschal greeting in the minor-key divine service text for Meatfare Saturday. Even more interesting is it to contemplate this subtle observation by the famous Orthodox theologian on the eve of the Sunday of the Last Judgment, which we so fear.

It is quite logical that the second to last Sunday before Great Lent is followed by a series of special “semi-lenten” days (Cheesefare Week), which mark the gradual transition from everyday life into the Great Lenten repentant podvigs (ascetic labors). What is the Church offering to us, and how will we answer its call?

The Apostle reading for the Commemoration of the Dead

But I would not have you to be ignorant, brethren, concerning them which are asleep, that ye sorrow not, even as others which have no hope. For if we believe that Jesus died and rose again, even so them also which sleep in Jesus will God bring with him. For this we say unto you by the word of the Lord, that we which are alive and remain unto the coming of the Lord shall not prevent them which are asleep. For the Lord himself shall descend from heaven with a shout, with the voice of the archangel, and with the trump of God: and the dead in Christ shall rise first: Then we which are alive and remain shall be caught up together with them in the clouds, to meet the Lord in the air: and so shall we ever be with the Lord.

Gospel Reading for the Commemoration of the Dead

Verily, verily, I say unto you, He that heareth my word, and believeth on him that sent me, hath everlasting life, and shall not come into condemnation; but is passed from death unto life. Verily, verily, I say unto you, The hour is coming, and now is, when the dead shall hear the voice of the Son of God: and they that hear shall live. For as the Father hath life in himself; so hath he given to the Son to have life in himself; And hath given him authority to execute judgment also, because he is the Son of man. Marvel not at this: for the hour is coming, in the which all that are in the graves shall hear his voice, And shall come forth; they that have done good, unto the resurrection of life; and they that have done evil, unto the resurrection of damnation. I can of mine own self do nothing: as I hear, I judge: and my judgment is just; because I seek not mine own will, but the will of the Father which hath sent me.

1 In Russian, the word for Saturday is subbota, which comes from the word “Sabbath”. Unfortunately, the English language still has that day named after Saturn.

2 Bishop Afanassy (Sakharov) of Kovrov, On the commemoration of the dead according to the rule of the Orthodox Church (St. Peterburg, 1999), 38 (Russian).