After a fire destroyed his life’s work, an artist renews quest to paint Torah
Share This

06.07.2018. APCNEWS.RU.   MOSHAV BEIT MEIR, Israel (RNS) — It was 2 a.m. There was a fierce dry wind, and the acrid smell of burning trees hung in the air when firefighters ordered Yoram Raanan and other residents of Moshav Beit Meir, a small communal village nine miles west of Jerusalem, to evacuate their homes.

Raanan, an American-Israeli artist, and his wife, Meira, grabbed some personal items and jumped into their car, only to find a long line of cars ahead of them, unable to move, reports Religionnews.com.

“We found out that the main exit was on fire so we headed in a different direction,” Yoram Raanan, 65, said of that November night nearly two years ago. “Before we got out of the moshav (village), I saw my studio go up in flames. I saw right away there wouldn’t be anything left.” Most of his life’s work — including more than 1,500 paintings and 2,000 drawings, watercolors and prints, many with religious themes — was destroyed in minutes. Among them were 160 paintings inspired by the Torah’s weekly parasha, a section of the Torah read in synagogues, created over a three-year period. Another five in that series survived, along with the house.

As the couple fled, navigating their way through back roads edged in on both sides by flaming trees, Yoram told Meira, “Gam zu l’tovah,” which is Hebrew for “Everything is for the best” — even when it doesn’t seem so.

“In my heart I felt something good would come out of this, that this was surely the work of God,” Yoram Raanan said.

An observant Jew, he acknowledges that his belief in God wasn’t always this strong.

Raised in Passaic, N.J., by parents he calls “Conservadox” — somewhere between Conservative and Orthodox — Raanan spent his summers at Jewish camp but became disillusioned with Judaism as he got into his teens. He thought it was hypocritical that his family kept kosher at home but ate fish at nonkosher restaurants.

“Judaism wasn’t inspiring me at this point,” he said. “I was an angry young man. I said, ‘Goodbye, I don’t need you.’”

For a while, art and the Grateful Dead filled the place religion once held. “They opened my subconscious and superconscious mind,” Raanan said, his eyes bright. “It transported me to a different world.”

After graduating from art school, Raanan embarked on an around-the-world trip. On his way to the Far East, he stopped in Israel.

“I fell in love with the country. I felt at home,” he said. “In America people would ask me if I’m Jewish,” in a way that never felt comfortable. While in Jerusalem, Raanan enrolled in an Orthodox yeshiva that encouraged reflection and debate related to the Jewish texts and Jewish practice.

“For the first time in my life I came into contact with people who were as passionate about the Torah and commandments as I was about art, and it was inspiring,” he said. 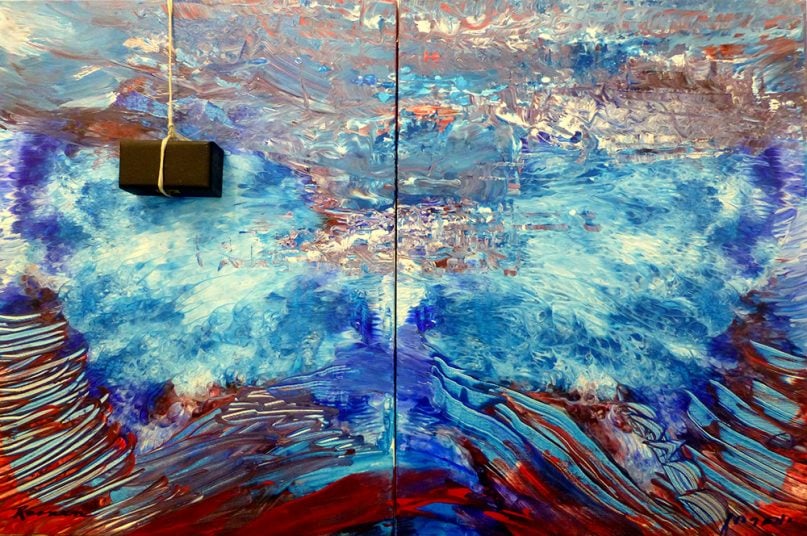 “Noah’s Ark Amid the Deluge.” Image courtesy of Yoram Raanan

Raanan spent the first half of every day studying Jewish texts and the second half doing artwork. At first he depicted landscapes, realistic scenes from synagogues and portraits of the large ultra-Orthodox families he saw in the park. Gradually his style became less literal.

“For the past 25 to 30 years, I’ve been a contemporary biblical expressionist,” he said.

Immediately after the fire, Raanan painted mostly in earth tones sprinkled with gold. His more recent paintings, created with a new sense of purpose, are brighter and more reminiscent of his pre-fire style.

Meira Raanan said she was initially heartbroken by “this great loss to Jewish art history” but that her husband’s belief in God has strengthened her own.

“I think because he had such a positive attitude, so much courage and faith and vision, it affected me in a very spiritual way,” she said. “We saw a lot of good come out of the fire.”

His new 3,000-square-foot studio is built atop the ruins of the old one. 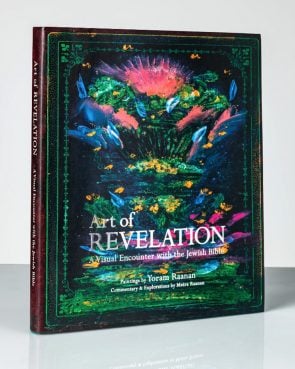 Although the blaze put an end to their dream of exhibiting the Torah-portion paintings in an international venue, it motivated her to create a coffee-table book using high-quality prints of the paintings stored at their printer’s office. The result is “Art of Revelation: A Visual Encounter with the Jewish Bible,” a glossy 235-page book divided into five sections corresponding to the five books of the Torah.

The painting “Noah’s Ark Amid the Deluge,” depicting the flood in Genesis, portrays not only the downfall of civilization with surging reds but also its redemption with a calmer blue sea. A black jewelry box representing the Ark hangs precariously over the ocean from a thread, a reminder that all living things depend on God’s mercy.

In the painting “Crossing the Sea,” brilliant blues and greens depict the Israelites’ exodus from Egypt. The accompanying text reads, “The crossing of the sea represents trusting the process of breaking through to find and reveal what is concealed within.”

Thumbing through the pages, Yoram Raanan said the book “is living proof of an endeavor. It makes the paintings alive to a greater audience. … It’s a reminder that the work didn’t really die, that the Torah doesn’t die. It’s a physical reminder of eternity.”